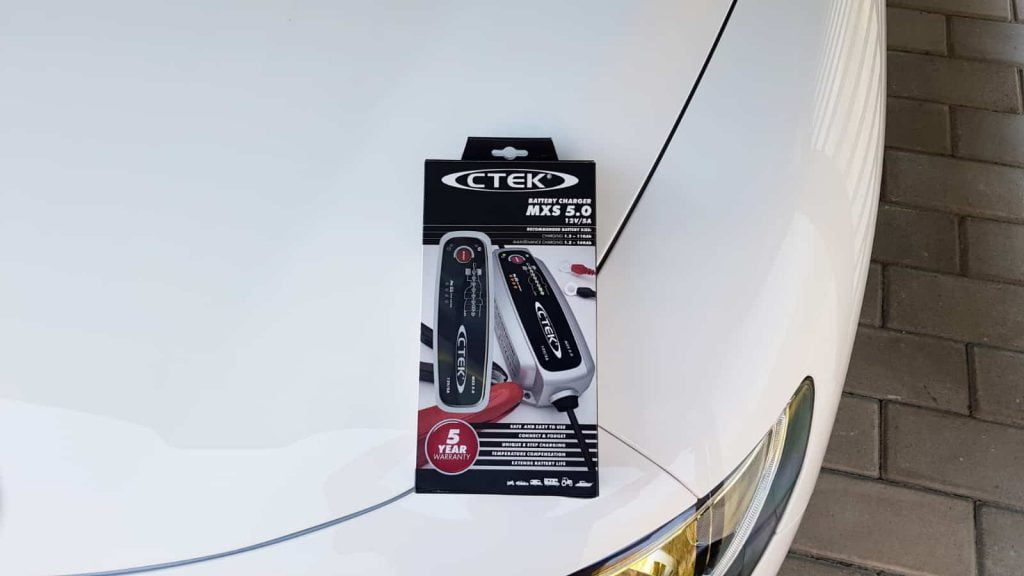 As I was winding down the other day, I opened one of my favorite YouTube channels, Harry’s Garage. While I do not consider myself to be a car guy (depending on who you ask), I do enjoy watching car shows and learning about cars.

The video I watched was all about how to properly store your vehicle(s) long-term. I don’t actually have a vehicle that would need long-term storage, but learning something new is always fun.

However, one of his recommendations did apply to all car and motorcycle owners. Namely, the importance of keeping your vehicle’s battery in prime condition. This is something that most of us, presumably, ignore. The truth is, having a well-maintained battery will not only save us a lot of money, but it can save us from a number of other issues, too (imagine your car not starting when you need it the most).

According to VARTA, 39% of all car breakdowns are caused by the battery. That’s a lot!

A car battery will typically last from 3-5 years, but this number can vary a lot. Many factors affect the life of a battery.

Nevertheless, with a good battery charger/maintainer, you can extend the life of a battery by years.

This will not only save you a lot of money but time, too (who wants to waste their time waiting around in repair shops?).

For his car and motorcycle collections, Harry uses a battery charger/maintainer made by the Swedish company, CTEK. The model he uses is CTEK MXS 3.8.

Now, because one of our family cars was having issues starting on cold mornings, I wanted to get a car battery charger anyway (I didn’t want to give up and just buy a new battery). Usually, I would just take Harry’s recommendation and buy one of the CTEK models, but the monomaniac in me had to dive deep and explore this topic thoroughly.

So, after way too many hours spent, I came to the conclusion that CTEK’s are among the best there is, if not the best charger on the market (in retrospect, I should have just taken Harry’s advice).

CTEK’s are among the most expensive chargers that you can buy, but they have a lot going for them. First of all, Swedes, like Germans, are known for their impeccable engineering. CTEK, unlike other car battery charger manufacturers, is focused solely on this niche. Everything they do is about charging and maintaining batteries in one way or another.

Product quality is, as they say, ‘in the heart of everything we do.’ It’s no wonder that they are the only company (as far as I know) which offers a 5 year ‘no hassle’ guarantee. That’s a no small feat, considering that a lot of other chargers fail after only a few years of regular usage (according to what I’ve discovered through various subreddits, forums, and by reading customer feedback). Other manufacturers typically give a guarantee of 1-3 years at most.

The technology used in CTEK chargers is impressive. After all, their (trademarked) slogan is: ‘The smartest battery chargers in the world.’ You have to be confident in your product to trademark a slogan like that.

So, what makes a CTEK battery so ingenious and convenient? Their products boast quite a few advanced and unique features:

CTEK chargers are also state-of-the-art battery maintainers. The MXS series can charge and maintain all kinds of motorcycle and car batteries. There’s a special ‘float/pulse’ mode for long-term maintenance, so you can leave your MXS device hooked up to the battery for as long as you want.

For example, if you own a motorcycle or a quad, you can simply connect the MXS charger to the battery (no need to disconnect the battery first) at the end of the season and leave it there until you’re ready to ride again.

In fact, if you happen to own multiple vehicles, you can buy special CTEK indicator eyelets. You need to mount these small devices on your batteries, and they will show you the battery’s charge levels via green, yellow, and red LED lights.

With these indicators, you will never have to measure (or guess) the charge levels of your batteries again. Simply check the LED lights and charge as needed. This is much cheaper than buying a separate charger for each vehicle. The best thing is that these eyelets make charging even more straightforward – they are easily accessible, and you can connect your charger directly to them. It’s like inserting a USB key into a computer. Easy, right?

If you happen to own a luxury or high-performance vehicle, there’s a good chance that you already own a CTEK charger, and you don’t even know it. Let me explain. CTEK makes branded chargers for over 40 of the most prominent and prestigious car & motorcycle brands in the world. There’s an exclusive ‘Client Brand’ team within CTEK that works with OEM clients and fine-tunes their chargers for each specific brand. If you have bought a particular model of Ferrari, Porsche, Aston Martin, Rolls Royce, etc., you probably received a CTEK charger with the car. These cars, in most cases, aren’t daily drivers, so maintaining their batteries is a must.

CTEK’s are also used by car dealers, first responders, and other professionals who need their cars or machines to be ready at all times.

For my needs, the CTEK MXS 5.0 is just perfect.

The other models in this series are MXS 3.8, MXS 7.0, and MXS 10. These numbers designate the output power of the charger, which is 3.8, 7, or 10 amps. The higher the amperage, the bigger a battery it can charge and maintain. There are also slight differences in charging modes, but you can check these out yourself on the product pages.

My CTEK MXS 5.0 is a 12V charger with 4 different charging programs:

It can charge batteries from 1.2Ah up to 110Ah, and it can maintain batteries up to 160Ah. The charger is also IP65 certified, which means that it’s splash-proof and dustproof. Another great feature of these chargers is that they are spark-free and reverse polarity protected (you can’t do any damage to the battery or your charger).

The charging process happens in 8 steps.

Step 1: Desulfation
The sulfates are removed from the lead plates by a pulsing voltage. This restores the battery capacity.

Step 2: Soft Start
A short battery test to check if it can accept a charge. If it can, the charging will begin.

Step 3: Bulk
The charger will charge the battery with a maximum current up to approximately 80% of its capacity. The charging speed is, of course, dependent on the surrounding temperature and the power of the charger.

Step 5: Analyse
This is a second test that will determine if the battery can hold a charge. If not, the battery may need to be replaced. If it can, the charger will proceed to step #6.

Step 6: Recond
This is an optional step that will only be engaged if you’ve selected it beforehand. It reconditions deeply discharged or old batteries, thus improving their performance.

Step 7: Float (fully charged battery)
The battery is 100% full and is being kept full by providing a constant voltage charge.

Step 8: Pulse (maintenance charging)
The LED light #8 will only come on if you keep the charger connected to the battery for long-term maintenance. The charger will monitor the battery voltage and give it pulses when needed. This is also known as trickle charging.

Because I did my due diligence before getting the charger, I was already charging our first car 10 minutes after receiving the package.

The battery in our Ford Kuga, or Ford Escape in the U.S., is 3 years old. The car itself is an MY2011, and it’s on its 3rd battery. The original battery died after 3 years, the second battery, which was VARTA, also went after 3 years, and the current battery is now 3 years old. For whatever reason, Ford is eating batteries like candies.

The current battery (Topla, 72 Ah) is also showing signs of weakness. In the winter, the car nearly didn’t start on several occasions. Instead of repurchasing a new battery, I decided to buy a charger and see if I can revive the battery and make it last for a couple more years.

I should have selected the ‘Recond’ mode, however, the CTEK representative I talked with (who’s also the leading distributor of CTEK in Slovenia, Europe) told me that the reconditioning function should be used mainly when the battery is disconnected from the car. His concern was that the Recond function ups the charging voltage from 14.7V to 15.8V, and that could potentially damage the car’s electronics.

He’s been a distributor for CTEK for 15+ years, and it’s always worth paying attention to the experts. Nevertheless, just to be sure, I sent a question to CTEK’s main headquarters in Sweden asking about this functionality. When I get an answer, I’ll update this article accordingly.

Next was my Peugeot 308 (MY2012). Surprisingly, it’s still using its original battery. If the car isn’t driven for a week or so, it definitely struggles when the engine is started.

Again, I probably should have activated the ‘Recond’ mode, but I didn’t for the same reasons as before. I have no idea what kind of battery is in the car because it doesn’t say in the owner’s manual, and the data-sheet isn’t visible on the battery.

The last car to receive the special treatment was my Alfa Romeo Stelvio (MY2019). This car has stop/start technology and uses an AGM battery (VARTA Silver Dynamic AGM, 95 Ah). I simply added the AGM mode and left the charger to do its thing.

The charger did precisely the same thing as with the previous two cars, but then it got stuck on step 3 for about 5 hours. The remainder was completed in about 2 hours. All in all, the green light lit up after 7 hours.

Based on all the information that I gathered about car battery chargers, I honestly think that CTEK’s are the best your money can buy.

Going forward, I will definitely strive to maintain our cars’ batteries at least every other week, if not more often. The more frequently I do this, the better it is for the battery. This way, I can easily prevent problems before they happen. With a little luck and regular maintenance, I should be able to add at least 8-10 years to each new car battery. Saving money is fun, having no car problems is fun, and making things last is fun.

You can do that, too. All you need is a good battery charger.

Because we at Durability Matters test everything over time, I’ll post an update to this article a year later, sometime around April 2021.

Henrik is a minimalist and founder of DM.

How To Properly Maintain Your Shredder

May 24, 2020
Henrik
Clothing and Accessories

May 18, 2020
Steven
Clothing and Accessories